The principal's phony warmth finally subsided, yielding to bitter hostility. She informed Crystal that, as a minor, she lacked the right to bring charges to court, and— worse—that her parents would surely understand such charges to be counter- productive. Crystal's throat burned. With a little leeway for her description of the emperor's-new-clothes effect on Crystal's parents, the principal, for the first time on record, had spoken the truth.
“You are dismissed,” said the principal, gathering up Crystal's precious data and eyeing an office paper shredder.
Now, Crystal knew that all her data was backed up—better backed up than almost any other data on Earth. But the gesture of separating her from her printouts struck an emotional chord. Crystal knew how to stand up for herself, and saw no reason to tolerate such abuse. She stood and demanded to be given her papers back. Her voice did not quaver.
About this time the Japanese boom box rose from its corner in Crystal's bedroom. A number of shocked neighbors later reported that it had power-walked out of the neighborhood and along the shoulder of the six-lane suburban through-street toward the junior high school. Had it malfunctioned? Was it somehow sharing the young Ms Fern's emotional impressions? Or perhaps the device had run calculations on Crystal's conversations about her school, and had finally determined that she was unsafe bringing her charges to her school administrators, even during school hours. 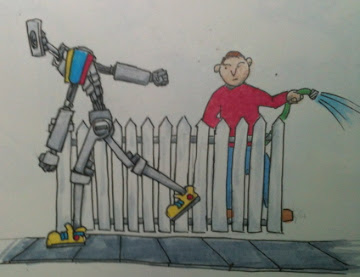 Back in the principal's office, Crystal flinched sideways as the video camera lurched out of its corner. She tripped over the arm of her chair, and a veritable tree of chrome unfolded and towered over her. Any commands the robot was following must have been sub-vocal, because the principal could not manage a word as she, too, rose wheezing from her triple-cushioned conforming-plastic swiveling office chair with built-in massage, and lurched forward.
There are some urges that prove universal among all teenagers, and one of them is that, when a goon reaches out to grab you and your authority figure encourages him to do so, you run. Crystal found her feet, found the doorknob, and inexplicably managed to dodge the video-camera robot's grasping hands. In its enthusiasm to catch the insolent student (although what could be so wrong about demanding a hardcopy of information one already has, we may never find out) the robot slammed its shoulders into both sides of the doorframe—a thud reverberated throughout the school. The video camera head turned back and forth rhythmically, whirring, while the contraption adjusted its shoulders to a more likely angle. Crystal, never athletic to begin with and hardly given to the anorexia expected of a girl her age, was spurred to an uncomfortable dash, squeezing between desks, bureaucrats, and Xerox machines toward the hall, but before she got there, she glanced back over her shoulder to see the principal wedged into the doorframe along with the robot, exceptionally red in the face, perhaps from exertion, perhaps from squishing up against all those steel protrusions.
Crystal was no one's fool. Once free, that robot would be more than a match for her puny adrenaline-fueled sprint. Where could she turn for safety? There was no hope of reaching home in time, but, regardless, the first step was to exit the school.
Exit she did, unnerved by the empty hallways—she had hardly ever seen them with fewer than eighty people competing over every square foot—and she was greeted by her trusty boombox, its lurid glory exaggerated by the midday sun. The poor machine's protocols were in a state of confusion, and rather than playing an indie-rock passage or borrowing the voice of a movie star, the robot bellowed, “I'm here! What's your status?” in a soothing, unfamiliar tenor. Where did this new voice come from? Was it evidence of true ingenuity on the part of an Artificial Intelligence? Do robots even have their own “real” voice? Philosophical concerns such as this were far from Crystal's
mind. In crisp, punchy sentences, she outlined her original hopes for the day, her disappointment, and the childish dispute over the papers, which she realized were now lost. The robot reassured her that it had backups of the data, and this time the thought helped to calm her.
The principal, in due course, interrupted their happy reunion, storming through the outer doors with one hand held up behind her to keep the video-camera robot at heel. Given the machine's crowning decoration, she looked remarkably as though she were warding off members of the press, using her hand to shield her face from the lens. But her signaled orders only carried so much weight to her computerized servant; like many full-size robots, this one carried an obligation to protect its master from physical harm if possible. Danger to the principal would override her own orders. Worse, the principal's influence had bent the robot's programing until it, too, valued damage to her reputation almost as dearly as damage to her flesh and bone.
The principal's video camera approached Crystal, lens full of menace. Crystal's loudspeaker placed itself in between.
The video camera is not a communicative device by nature—only receptive. But the little red light that indicated it was filming blinked more furiously than it had ever blinked before. The loudspeaker, which is communicative by nature, squealed a Led Zeppelin guitar riff. At this point most of the student body emptied from their classrooms, and scurried in all different directions until some of them, by chance, came out the front doors and became witnesses to the world's first contest of this type.
The two robots, finally at liberty to use their full strength, clashed together at lightning speed, each desperate to protect their own charge and furious to reach their target. Their long legs stamped into the grass, pistons shrieking, trying to find the best purchase. Their slender arms whooshed up to each other's shoulders and then down toward each other's legs, like time-lapsed wrestlers trying now for a pin, now for a throw. 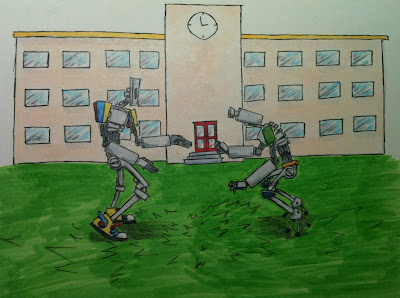 Crystal knew she couldn't hope to sway the battle by force, given the machines' speed and power. Nevertheless, she ducked her head, ran out from behind her robot, and tore up a clod from the over-fertilized, over-irrigated lawn. “Aim for the lens!” she cried, and tossed the muddy grass to the valiant loudspeaker. The video camera reached out to bat the clod out of the air, but Crystal's robot was faster. It caught the mudball, torqued its elbow to avoid the other robot's arms, and with a squelch it smashed its palm into the video camera's lens. The robot may have had other, subtler sensory input, but it wasted a crucial moment tearing at the mud with both hands. 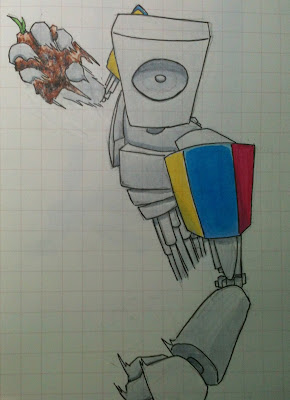 Reaching almost casually past the video camera, Crystal's robot lifted the principal into the air by the collar of her blue wool blazer, and the violation of her personal space paralyzed her video camera. The principal, meanwhile, shouted with indignation, but rather than attempt to argue logically for its master's respectful treatment—or perhaps at a loss for words—the loudspeaker robot produced the sound familiar to millions as the professional basketball referee's buzzer: it buzzed and kept on buzzing.
Thinking an alarm of some kind was going off (fire? carbon monoxide? what sound does a “despicable administration” alarm make?) the remainder of the student body rushed outside. Among the first was the notorious Jimmy Green. Shrugging his hands deep into his pockets, he looked at Crystal; looked at the robot; looked back at Crystal, and smiled charmingly.
Green knew nothing of her detective work, or of the principal's reaction, but perhaps it was obvious to him that some abuse of power was taking place. Perhaps he couldn't tell, but jumped to the conclusion that Crystal was staging justified resistance, because he wanted to believe that. Perhaps he had severely overindulged in basketball on TV.
“Foul play,” he said, simply, and the robot, as though it had been waiting only for someone to show they understood, went quiet.

By Valery Grue
Posted by Nemo at 8:41 PM No comments: