Due to a mistake with the shipping company, or maybe all the way back at the assembly line, Crystal Fern's actual present on her thirteenth birthday—you know the one: the one that you've discussed not only with your parents but with your aunts and uncles beforehand, pleaded and bargained for, which they've agreed is part of life for a new generation of kids your age, next to which all the other presents this year are filler material intended to assuage your sense of entitlement, indicating that for some reason they don't understand you would gladly go three years without so many knickknacks in exchange for this life-changing boon—that present—her actual present, a Japanese boom box whose main speaker measured no less than ten inches, arrived at her suburban Illinois home welded to some kind of modernist chrome case whose paint was limited to a deeply un-hip pattern of silver and primary colors. Needless to say, the girl's sense of place in the world was shaken. Had she done something wrong? Was this visual assault some sort of test that she was meant to overcome?
And, if she left things as they were, would she garner short-lived abuse from her friends when they saw the garish thing, or would she be thoroughly socially crucified? 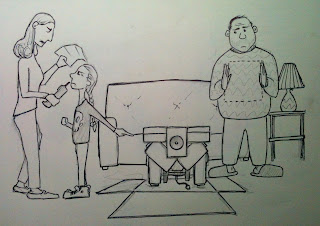 Crystal's mother got mad at the company. Crystal, unfortunately, was old enough to press her as to which company she held responsible—retail, or manufacturing?—a question that led her mother to simultaneous shouting and hedging, a combination made in Hell. Her father stood deferentially to one side and pointed out that a speaker's stand does not affect the sound it makes. He gestured at the stand with both hands open, as if to emphasize the thing's functionality by making box-shapes in the air. Anything can sit on top of a box. Crystal and her mother were still shouting, ignoring his eloquent hands, when, as though to prove that it was not just a box, the stand, stiffly, stood.
First it rocked forward slightly, balancing its full weight on oversized toe and heel treads. The long, segmented legs then straightened, compact tapering knee joints smoothly took on the machine's untold weight, the arms were forced apart slightly from where they had hugged the tongued-and-grooved shins. Hydraulic cylinders hissed, turbines whirred to life and pistons extended. Lowering its arms for the first time to its sides, the robot (with the confident clumsiness of a newborn colt) knocked three cardboard boxes, a wad of wrapping paper, a plush pony and a bar of mediocre chocolate off of the mantle and into the hands of mother and daughter, silencing both, and demonstrating once and for all the exceptional compensatory environmental subroutines (“instincts”) of its make and model.
No matter where a robot is intended to deploy, or what task it is intended to fulfill, every robot's underlying purpose (the very word deriving from a Russian term for “servant”) is to serve humanity: to give them what they want, make them happy, or even facilitate their haphazard efforts to make themselves happy. In this case, Mrs. Fern craved an object to mother, smother, and/or nurture, while Crystal felt a void of respectful emotional support, relative to her maturity. (I'll bet you thought the chocolate had gone to her mother, and the pony to Crystal, didn't you? See, sometimes robots know humans better than we know ourselves.) 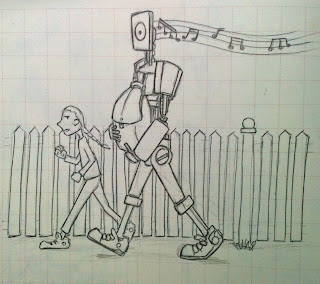 Before long, the robot was Crystal's confidante and bodyguard on her walk to and from high school. She told it how Jimmy Green's voice, having finally stabilized, incited unfamiliar, intriguing feelings in her, and how Nancy Evans' brand of kissing up to her teachers disgusted her more than ever this year, as she was beginning to realize that, no, her career opportunities were not determined by how she performed in class— or at least (she widened her eyes wisely) not by her test scores. In return, the robot broadcast the alternative-rock radio station, put on the hit single from the latest Clingy Snazz record whenever her friends were around, and carried her books, the family sofa, and the engine block of her Volvo (when it started to smoke one day) to wherever they needed to go.
But just as social acceptance had underpinned Crystal's original obsession with her stereo, the robot's programming extended to monitoring its master's emotional health and, by extension, her reputation. The main threat to Crystal's health, as she reveled in her official teenager status, was a fledgling understanding that her authority figures compulsively lied to her.
For two months after her birthday, Crystal had the robot draw publicly available data from the school district's records, and read it to her in the voice of Humphrey Bogart. These searches came up disappointingly empty to the scandal-hungry teenager. Not long after she abandoned the searches, though, and after a vitriolic debate with Crystal's aforementioned rival, Evans, which had started as accusations of cheating on tests but had touched on the drugs finding their way into the school's football program, the robot determined that Crystal's mental health would be more stable if she better understood the pathways of finances and power in her school. Without understanding a single byte, the robot compiled a table of asymmetrical funding, individuals wielding power, and a deduced graph of how they might connect, and after an awkward rendezvous with the family's printer, presented a hardcopy to Crystal that night.
However rewarding her gratitude may have been to her servant's circuits, this had the unintended effect of a new argument the next week, this time between Crystal and her school principal, to whom she had presented indisputable proof of her boss's corrupt activities.
Crystals parents would hear of the scandal, and of the argument, only after it was too late to prevent the fight's escalation.
The high-school sleuth was surprised to see an awkward chrome stand holding an expensive video camera in the corner of the office—but she kept her shoulders back as she took her seat, and explained her evidence in a steady voice. The fat, pencil eyebrowed principal straightened the lapels of her voluminous navy blue blazer, and a red light began calmly blinking on one side of the video camera, as if responding to some sub-vocal signal. In a deceptively amiable tone of voice, the principal attempted to interrogate Crystal: how had she come by these data? was she involved in a quarrel with another student? perhaps a family member? did she possess professional-grade surveillance equipment? and why had she begun investigating the school district administration to begin with? But the girl hedged, avoided, and answered questions with questions, trying to bully the principal into responding to her accusations. She revealed nothing of her hi-fi assistant. 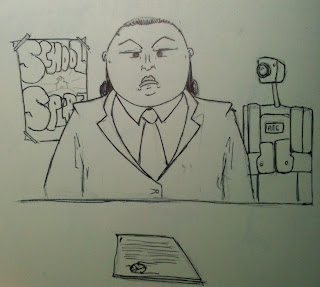 By Valery Grue
Click here to read the action packed finale!
Posted by Nemo at 12:12 AM No comments: