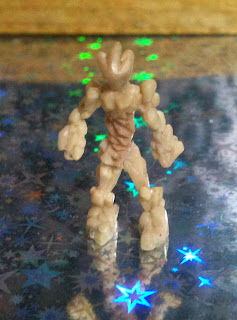 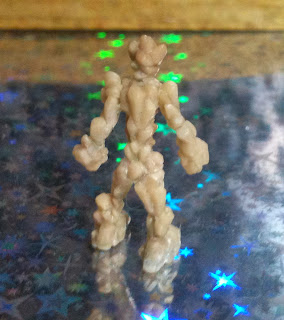 The Crystal Companion is a little alien creature the Astronaut found out in space. While scouting amongst a far off asteroid field, the Astronaut's ship was attacked by numerous of these diminutive crystal lifeforms, sensing the warmth and energy of the space craft. The Astronaut figured out what they were after, and managed to escape before the crystal creatures disabled the ship. As the space adventurer was leaving, one stowed away on the ship. When it was found, it befriended the Astronaut. The alien was simply named "The Crystal Companion."
The Crystal Companion and the Astronaut have been on many journeys together, and while they cannot speak to each other they communicate quite well, proving the creature's sentience. The Crystal Companion also helps to repair the ship during some of the more tense moments on adventures. It has been known to be able to regenerate if cracked or smashed, and feeds off energy sources. It can change its color and the sheen of its body if desired, allowing the companion to camouflage into the background and avoid sparkling. If more of its race found earth, they might become a powerful and dangerous force, but this one seems to harbor no desire to cause chaos.
Posted by Nemo at 9:51 PM