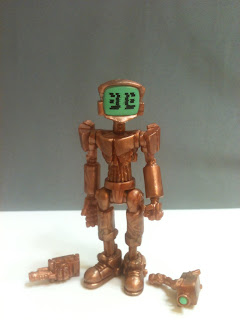 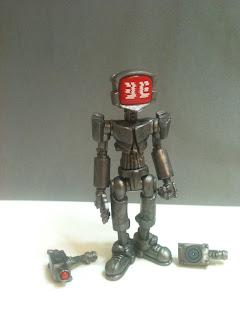 Tomorrow, Saturday October 3rd we will be releasing the second round of AV Robots!

Two drilling rigs in the ocean, just a mile apart. The robots working on them receive a strange transmission, an image and a call to arms for the living machines of the universe. One rig group interprets this as a message of equality: We should work to be equals, and not just servants. The other rig decides that it means robots should rule over humans.

But one bronze robot knows that if the company gets wind of this, they'll destroy the rigs and all aboard without a second thought. Can it save them? Can it even save itself?

This release features the bronze and gunmetal PVC that matches glyos' and many sister company releases from the past months. Minimal paint apps mean these will be great for building and affordable!
Furthermore, each TV head sports a Gendrone Rebellion tampo, scratchy and distorted from it's long travels through space and time.
There is also a unique character tampo on the bronze speaker head. That one is still kept secret! It will likely only be released this one time.

These robots will be $10 each, and release at 6pm PST.