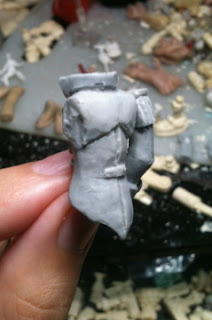 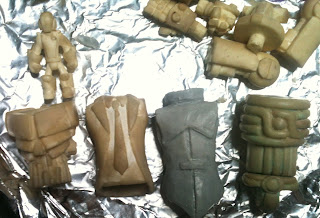 Hello everyone! Its been a bit silent around here, because I've been spending all my time sculpting and preparing for next month. Its going to be a big month!
I will be at NYCC with some new and exciting previews of what's to come in this line. The robot is practically ready for production, and I just need to prepare to give it to Matt Doughty for his approval. I am also working on the Astronaut, Suit, and that fourth figure, which you see a preview of above. The working name for the fourth figure is Space Pirate, but it also has a vampire vibe going for it. What do you think?
These figures should all be in various states of completion at NYCC for you all to check out, and there will be extensive photos of the convention for everyone that isn't able to make it.
Also, I am working on a comic project with Ralph Niese to be released near the convention. It shall be released online for all to read, and in comic book form!
In the next week there will be a story about The Robot by writer and dye-artist Roy (kranix)!
Finally, there will also be another story, a prequel to the comic in fact, by my resident writer Leif, who wrote the previous stories on here.
Hopefully you all are as excited as I am! Production is right around the corner, and I cant wait to see the response The Robot gets when everyone has a chance to hold one in hand. Its a concept I have been working on for over two years now, and I've evolved much as a sculptor over the years. For those of you who have the prototype robot from last year's convention, I think seeing the differences between the two sculpts will be pretty interesting.
Posted by Nemo at 12:54 PM