On the october toys OMFG forum, (Here) the fan -PookeyG- has been making some awesome fantasy stat cards and storylines for the OMFG figures! He just got around to King Castor, and it looks super awesome. The story is great as well! 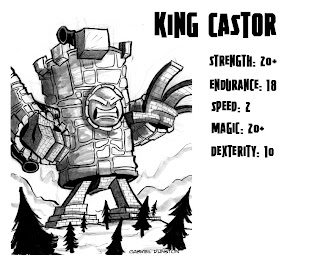 Usually made from an old castle or disused brick fortress, King Castor is the final resting place for a magic user who has not lost the will to fight, only the ability.

Rudimentary steam engines are haphazardly attached to these structures to give them some mobility. After they are prepared, a disabled magic user (typically a witch or wizard who has grown too old and feeble to walk) is brought inside where they perform a last ritual in which their spirit is bound to the brick structure thereby giving it life. A face resembling the magic user emerges from the bricks outside of the area where the witch or wizard was interred.

Despite powerful engines, King Castors are always extremely slow. Their brick bodies are strong and sturdy, but also extremely heavy. Typically this is not too large of a hinderance in battle. The power of the interred witch or wizard is only amplified by the now large and more sturdy building.

Despite these stone buildings being nearly timeless (barring any outside force of destruction) they are not exactly ideal for the interred magic user. They require constant upkeep. The fires in the steam engine must be ablaze at all times. Should the fire go out, the King Castor shall be immobile and the spirit of the witch or wizard that animated it shall be trapped until the fires are re-lit. If the animated fortress can sustain a large enough crew, it can also be outfitted with cannons and other incendiaries.

Work crews responsible for upkeep typically live in the chambers inside of the King Castor.

If the structure is completely destroyed, the spirit of the magic user remains on earth until armageddon. As such, most magic users prefer death and passing in the next world. Only the most stern and vengeful opt for interring as a King Castor.